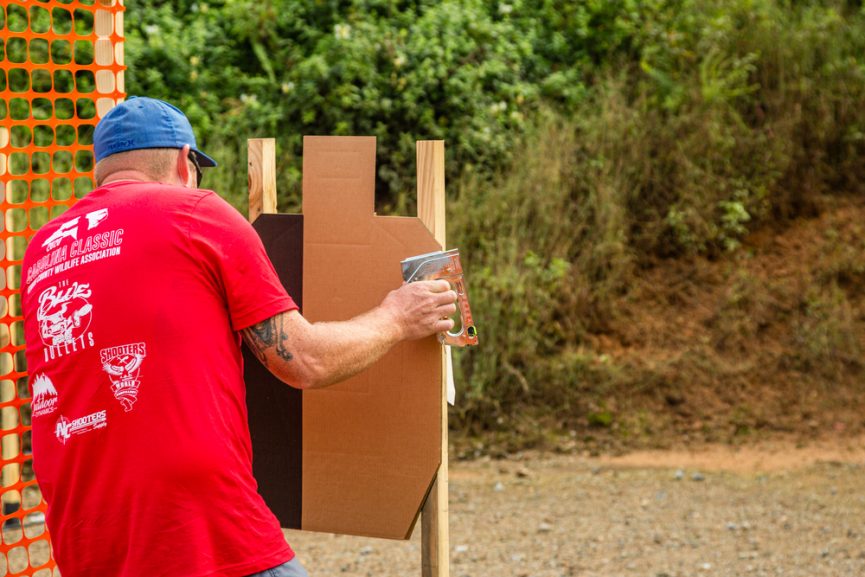 Typically you only walk a prize table at bigger Area matches and Nationals where all the shooters end on the same day and there is a formal awards ceremony. Because of the multi-day schedule, only half the competitors will be on the range each day, which poses a problem.

Most level 2 matches solve this by just randomly assigning each prize to a competitor, and when you check in you find out if you’ve won a prize, and if so what it is. Less than ideal.

It’s also not great for the sponsor who donated product to advertise at the match. With the typical approach, only the person who receives a particular prize knows which sponsor contributed it.

Last year at the 2019 Carolina Classic, the match tried out a different system: you walk the prize table when you check in before your scheduled shooting session. (Due to the 2018 NC Section being scrubbed by Hurricane Matthew, there were a lot of extra sponsor prizes, so the main concern was that they wouldn’t all be gone and have to be stored for another year.)

The prizes were divvied up into 4 equal batches, and one put for each of the four shooting schedules. The prizes were all laid out, and the early bird got the worm. Of course, this meant the most expensive prizes were generally picked up first, but dollar values aren’t everything. An expensive accessory for a gun you don’t shoot is worthless.

Second, the “pink range bag” problem. As a match, if a sponsor donates a bunch of range bags and one is pink, do you pick a shooter registered as female at random and give it to her? Do you give it randomly to all the shooters? If you let the shooters walk the prize table, the person who wants it can take it. It might be a female shooter, it might be a dad, uncle, or granddad that knows someone who would love to have it.

Third, the issue of trying to pawn off or trade a prize you got but have no use for. In years past, I’ve randomly drawn a $200 gift certificate to a custom gun maker that I wasn’t going to use and was quite happy to swap it for a hundred bucks cash to someone who was planning to buy a gun from that maker anyway. This year at a major match in another state, I won a welded steel target stand. I already have a matching set of target stands I use for practice and had no use for another one. I ended up just donating that one to get it out of the garage and make space.

By allowing shooters to walk the prize table, they get to pick the prize that is not necessarily the most expensive, but is the most valuable to them.

For 2020, the match tweaked the formula a bit. Once again the prizes were divided into four groups, and then each group had the more expensive prizes set on a separate table. In each session, a limited number of competitors were randomly assigned to the higher prize table (although of course they could have taken a prize from either table if they chose).

This worked out to be a nice hybrid of letting shooters pick the prize that is most useful to them individually which rewards shooters who show up early (to avoid a backup of shooters showing up at the last minute), while also not requiring you to show up early to get a decent prize.

I have to say, I don’t think this is necessarily the absolute best way to do prize tables for matches like this. But I will say it beats the standard method, and it’s worth giving a thought to how to continue to improve how it’s done.