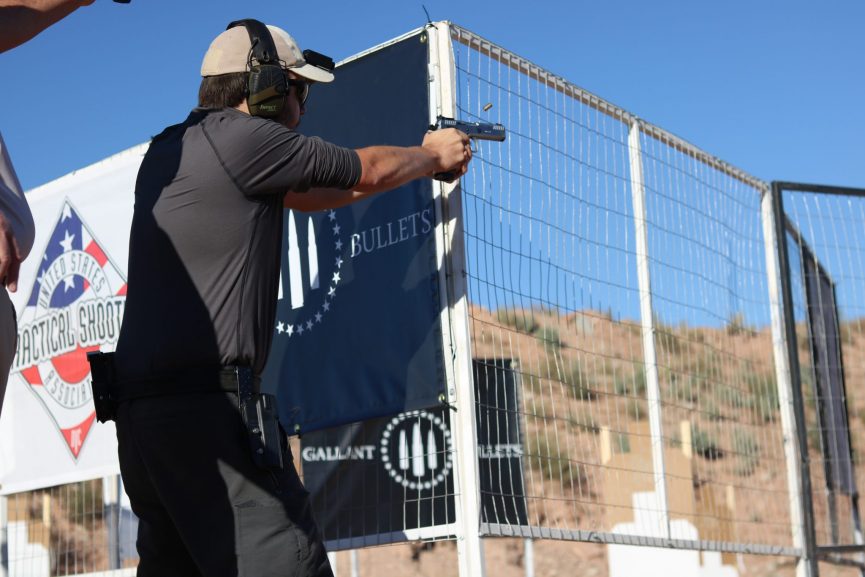 I flew to Iron Sights Nationals  in St. George, Utah this year, and it was the second time I’d ever flow with guns. Nobody ever talks about the hassles of flying with competition guns and enough ammo to shoot a 417-round match (it’s a lot more than 417 rounds), so I wanted to talk about my experience while it was fresh.

First off, ship your ammo. It is somewhat expensive, but well, well worth it. Compared to the $25 for another checked bag or $100 for an overweight bag, not to mention match fees, plane ticket, and so on, shipping is well worth it.

As it happened, my wife was flying with me but not shooting, and each of us could have 11 pounds of ammo per airline regs, which worked out to be about 300 rounds per person. The minimum round count for the match was 417, but more than one hundred of those shots were steel, most of them mini poppers and some of them partial mini poppers. Extra shots are gonna happen.

I brought a carry gun and 25 rounds for it, plus 11 dummy rounds to have one mag for hotel dry fire, meaning I had 564 rounds to get me through the match. I ended up using 21 of them to check zero on my main and backup guns (more on that later), and had to reshoot a stage. All told, I finished the match with 73 rounds to spare, which is way too close for my taste. If I had just shipped the 600 and brought 200 with me in the box with the guns, I would have been a lot happier.

Trevor Schuneman and Travis Beal, both shooting the Tuesday through Thursday schedule offered me some of their leftover ammo to check zero with, which was very generous. It turned out that the ammo didn’t run very reliably in my Stock 2s with unreamed barrels, and had a weirdly different point of impact, both of which are to be expected. I appreciate them offering me the ammo, but putting myself in a situation to rely on charity at a Nationals was unwise.

Side note: Southwest, either going to Vegas or coming back to RDU, did not even ask about ammo or want to open the cases, much less ask about weight of ammo.

Also, if the ticketing counter worker tells you to hang out nearby and wait to see if TSA wants to open the case, wait. Wait as long as they say, plus five minutes if you can spare the time. On the outbound leg of the trip, we were told to wait for 10 minutes, but stayed for 15 just in case. Right as we were about to leave, the TSA guy came out to ask us for the key to open the case. (He said he wanted “to see how the ammo was packed.”)

Side note #2: Although CFR §1540.111(c)(2)(iv) clearly states “only the passenger retains the key or combination” to the locked case containing the guns, TSA is interpreting that to have a temporary exception to give the key to an agent so they can inspect the contents of your case without you present. I tried to push back and be allowed to go back and unlock the case and got the “I can call a supervisor, but it’s early so it might take a while…” runaround and ended up just handing over the key. I don’t like it, but that seems to be the regulatory interpretation of the plain language of the statute. Bummer.

Finally, and maybe this is obvious, but pack things better than you need. The locking pistol case I had to use just amazingly happened to be the right size to fit two Stock 2s rotated to fit together. They felt very snug that way, and I filled the rest of the case with flip top plastic ammo boxes and towels and had to use significant pressure to close the box. And somehow the guns still moved enough in transit to noticeably scratch the inside of the box. Especially with adjustable sights, which are a requirement for me, I should have better protected the guns in flight.

Luckily, the match at Southern Utah Practical Shooters had three different function fire bays, so I was able to get one to myself and shoot a number of three-round groups to re-zero, and it didn’t take a lot of ammo to do either. But things could have easily been much worse.

So next time, I’ll make sure to pack the guns better, ship my ammo instead of messing with packing it, and arrive early enough to stay at least 15 minutes near the ticketing desk to wait for TSA.