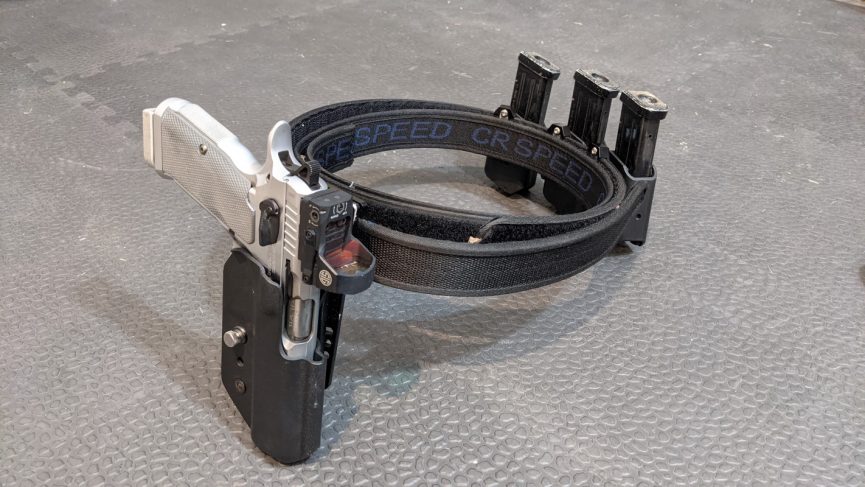 This month, I decided to take out the Stock 2 with the red dot on an EGW plate and shoot a match with it. It’d been running well in practice, and I thought it would be interesting to take it to a pretty tough local match.

As I discuss at the end of the match video, I decided to shoot it with 15 round magazines, following on from last month’s match in “Production 15” (aka IPSC Production). In part because I was curious: there’s a lot of discussion about what the future of the US Carry Optics division should be, and I was curious to see in a match context what the difference between 15 and 23 rounds would be in stage planning. (I had to do an extra reload on 3 of the 5 medium or long courses of the day.)

The second reason, as you see at the end of the match video, is that the 23 rounders with the fancy Grams spring and follower kits just do not feed 147 Flat Point bullets. I know this comes with the territory, and I’ll switch bullet profiles to find something that will work with these mags if I choose to keep going with this setup. (The Glock 23 round mags fed the Flat Points just fine, strangely enough.) Also, the mags don’t reliably lock back, which I’m sure I can probably improve with Mr. Dremel. But this is exactly the kind of thing that is not interesting to me and I would prefer to compete in a division that didn’t require it. I’ve been shooting these Tanfos for 5 years now without changing so much as a magazine spring and they feed and lock back 100%.

If I have to change my gear and ammo to work in more finicky magazines, I’ll do it, rather than being the one curmudgeon who won’t stay with the times. But I still think it’s a bit pointless–capacity isn’t an advantage when everyone has exactly the same size magazines. If the purposes of equipment divisions is to establish various level playing fields upon which competitors can compete, then you can assume everyone will have the same gear. Why 140mm for CO? Why not 170? There is no defining reason except it seemed like a good idea at the time. In my opinion, the division is just fine with 15 round magazines, and much closer to actual practical applications. (The name “Carry Optics” is stupid to start with, but how many people carry their red dot gun with a 23 rounder under their T-shirt?)

Anyway, on to the stages.

I was happy with my performance overall, with one Delta and one No-shoot for the day, shooting 91% of points overall. (A few stages like 5 and 8 really dragged that down.)

As I was shooting, I was calling lots of second-shot charlies, but this was such a close, hoser stage I just couldn’t find it to slow down and aim more. Most of the CO guys didn’t have to reload on the 20 rounder, but I don’t know that it particularly slowed me down.

A quick unloaded start short course that turned out to be a fun stage. I’m always surprised how short stages like this have a surprising number of ways to shoot them. At least on my squad, folks seemed to like it.

I had just a little hangup with the magazine going into the gun, but after that everything went well. The targets were open and only about 7 yards away, so all Alphas isn’t the hardest thing in the world, but I was happy with it.

On this stage, a bad habit of mine bit me. I tend to start exiting positions early. My visualization was to start moving while shooting the third target, the open bottom target on the double stack. But as you can see in the third person, I’m shooting the top partial with a foot in the air. This was totally pointless from a movement perspective and certainly didn’t help control the gun.

I saw the dot dip into the white as soon as it went off and sent another one without hesitation, but still, I couldn’t take back the bad hit. I need to work on being patient and not actually starting to shift my weight or move until it’s actually time.

On this stage, I had to reload twice, because the way the stage was set up left 10 rounds from one spot in the middle. (In the design, the barrel was further uprange so you couldn’t see the two targets in the “alley” from one position.) I struggled with both reloads, just a lack of practice and reps on this gun with these mags. Definitely something to work on.

Everything went pretty much to plan here. The popper at the end not going down was from a low, partial hit that made a good noise but didn’t have enough juice to put the steel down. But I kept the gun up, so as soon as it looked like it was an issue, I sent another. So the recovery at least was good.

Another stage that went almost exactly to plan. I did my reload two targets later than visualized. Not exactly sure why I didn’t do it coming out of the port with the steel. I think I was focusing too much on hitting the spot on the fault lines to shoot the next 4 shots.

There was a good amount of discussion about this stage, and I chose the plan to shoot on the move around the side instead of posting up and shooting and then cutting through the middle. I think it mostly worked out, but the charlies ate me alive during the shooting on the move. Also, the last target, I was planning to pivot to, but with the PVC fault lines I didn’t know exactly where I was in relation to it. I ended up stepping back and being off-balance and shot falling out of the shooting area which I try to avoid whenever possible, for reasons like this. I called the bad shots as soon as I shot them, but it wasn’t worth getting back in the shooting area to make them up.

The left popper activated the left swinger, the right popper the right swinger, and the middle popper the left max trap, which in turn activated the right max trap. I chose what was actually a pretty safe plan, to hit middle-left-right and then wait for the max traps then shoot the swingers. (This is one of those stages where it really helps to get to see people on the squad in front of you shoot it, and we didn’t. I was third or fourth on the stage, so I had to pick a plan and go with it.)

I saw another shooter on the squad run the more aggressive left-middle-right plan and pick up the left swinger before the max traps. It was definitely faster and more aggressive, but with less margin for error. He shaved a second off the time (5.5 instead of 6.6) which is a huge difference when calculating a hit factor. If I’d seen it run that way before I shot, I’d know I would have had to match it.

Bad draw with the gun hanging up in the holster because I pulled out instead of straight up, and a bad reload. Plus 4 charlies. I definitely have not been keeping my stand-and-shoot skills sharp the last few years, and it usually shows on classifiers.