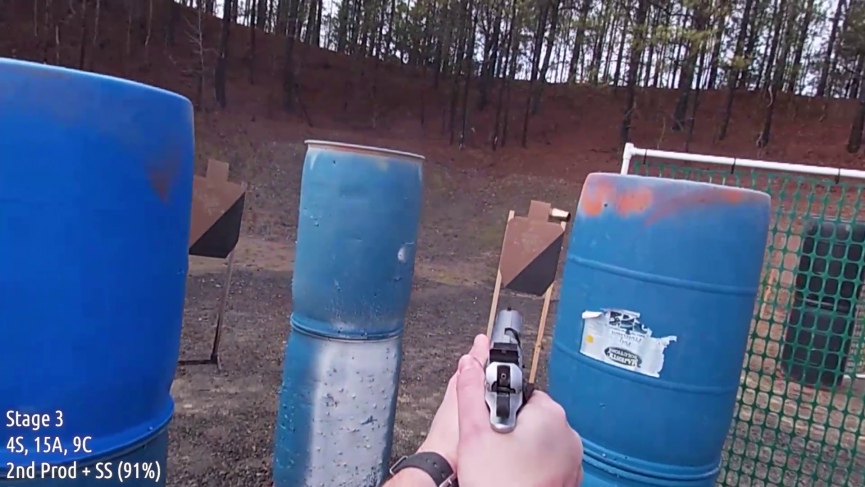 It was a good day out at the range with friends, and surprisingly warm if a little muddy in places. SC Section, Area 6, and Production Nationals are all coming up fast, so this is the first match of my 2021 season and it’s a good start.

Since the last two matches, when I was shooting my M&P Pro, I had taken a few weeks off over Christmas and gotten back into dry fire with the Stock 2, putting in two sessions the week before this match. For the most part, it all came right back, although there are a few things that just take reps to get back in the habit of. My grip was a little off on the first few stages but by the end of the day everything was back to normal.

Stage 8: My grip was off from the start, which meant having to work a little harder to find the front sight, and the gun was just generally moving around in recoil much more than I like, thus the slow splits up until the last magazine. (Ironically, a good grip on the plastic M&P probably would have been easier to control than this bouncy metal gun. But obviously the solution is to fix my grip now that I’m back on the Stock 2.)

The good news is that I was waiting for the sights and calling shots as I was shooting, thus the makeup shots on targets 3 and 4.

After the first reload, my grip was still wrong, particularly the weak hand being out of place. So, I was pulling the trigger very carefully (slowly). It was the best I could do in the situation.

After the second reload, everything started to come together. You can see the gun jumping much less in my hands as I finally got the grip right with both hands. Unfortunately, I was thinking about my grip and was a little late moving forward to see the last target, but it didn’t end up costing me too much time.

(Third-person video quality is lower this month due to leaving the camera on the wrong setting.)

Stage 1: My natural inclination on a stage like this would to be go full turtle and aim hard for each shot, and I knew that would put me way behind on raw time. Instead, my intent going into shooting this stage was to not spend too long confirming my sights, just break the shot when I see a good picture, and shoot a makeup if I need it.

That’s exactly what happened particularly in the second position, where all three targets ended up getting three shots each. I was just not gripping hard enough with my left hand, and so each target had at least one shot I wasn’t happy with.

The swinger really bit me, because I called two… I won’t say “good” shots, but I called two shots on paper. One ended up being a delta 2 inches from the edge, and the other was a clean miss. I was pushing my luck and should have put another shot on that target.

Stage 2: I knew this stage would come down to moving aggressively, but aiming just enough to get good points on the targets, which were all open targets within 10 yards. But having no partials made them very tempting to go too fast on. (I talked more in depth about the design of this stage a few days ago.)

My intent on both the left and right sides was to move hard to the shooting position, shoot one paper while settling in, and then grip hard and rail fast splits and transitions on the other two targets. As for the two middle positions, just get there fast, shoot each target quickly, and haul ass out.

Everything went pretty much to plan except that my left hand grip was just a little loose coming out of the reload, leading to a delta on each of the two targets right after. But I was committed to busting through the stage as fast as I could and didn’t have a lot of makeup shots, so I just got what I could and got out of there. Obviously the theme of weak hand grip is starting to develop.

Stage 3: I really liked this stage. The tight shooting area and the way the targets appeared and disappeared gave it a really interesting flow. Early on walking the stage through, I saw the obvious plan of going left, forward, right, and then back meant having to move backward. I saw a plan that meant going left first, then right, then forward, which saved me having to move back, which can often be a good time-saver. (My buddy Gary Byerly’s rule is that every step backwards should be counted as a step and a half when pacing off distances through a stage.)

As it was, I don’t think it was a clearcut advantage, and I think my hesitation during the stage lead to generally slow execution. Also, just because the stage plan involved memorizing the order that targets would appear and disappear in, I was thinking too much about that and not enough about gripping the gun.

Should I have abandoned my plan and gone with what everyone else was doing? Maybe, or maybe not. The hesitation of mixing up plans might have made me even slower all told. Ultimately my main takeaway is just really visualizing in these kinds of stages where targets appear and disappear so when it’s time to shoot, you’re just flowing through and thinking about gripping the gun and calling your shots.

Also, planning to shoot to 10 at the beginning of the stage (4 steel, 3 paper) was risky and I knew it. I planned a contingency that if I didn’t go 1-for-1 on the steel, I would do a reload moving across. But regardless of planning for it, having to do it threw me off and instantly put me in a conscious mindset which was slower.

Stage 4: The stage plan I chose was not what the designers were planning. Historically I usually try to avoid “gimmick” stage plans like this where you exploit an apparent loophole, both because I think they tend to be a sucker’s bet, and just out of high-minded respect for the stage designer blah blah blah. So obviously this time I chose to take the gimmick and give it a try. My buddy Gerrit, who was shooting Single Stack Minor and edging me out on three of the four stages of the day so far, shot the “intended” plan and actually beat my time by four tenths. So standing back and sniping definitely wasn’t a slam dunk better strategy.

Like Stage 3, planning to shoot to 10 at the end of the stage was a calculated risk, and one that meant after I used my one makeup round I had to confirm each sight picture more before pulling the trigger, adding a few tenths per shot.

Overall, this stage went pretty much like Stage 3: thinking too much about navigating the stage, and not just leaving myself free to grip the gun and call the shots.

Stage 5: This is where the day started coming together for me.

I shanked the DA shot off the draw, but after that, my grip was dead on. (Another instance of shooting to 10 forcing me to be very careful after I used my one makeup shot.) The whole stage basically demanded to be shot on the move since you could only see two or three targets from any one position and you just had stay low and move through.

I definitely dropped too many charlies by not settling the gun on each target while moving, but overall this was the best stage of the day yet, by far. I managed to edge out the stage win on this one which was a good feeling. (Stage wins at club matches don’t always mean much of anything, especially if your competition has some major problem. But in this case it felt like I could still pull out the win for the day.)

Stage 6: I was so happy at how well the first six steel targets went that I forgot to reload moving to the middle. That got me out of the flow (shooting in the past tense, as Brian Enos would say) and then the left swinger was just swinging away as I got my sights on it. I could feel the seconds slipped away while I waited for it to come out. Then the right swinger did exactly the same thing as I transitioned to it.

In retrospect, I should have waited until it came back out and just fired two shots at it, but I really wanted a good time on this stage. Like on Stage 1, I’m very conscious of my tendency to over-aim when the shots get tough and I wanted to just call them and be done. As it was, the hits were good even if the time was a little slow.

(This stage was only 10 shots, thus 50 points, with three positions. Ballparking the raw time at 9-10 seconds, that means about a 5 hit factor, thus every charlie is worth .4 seconds. I ended up sneaking the win on this stage by shooting .3 slower but taking 2 fewer charlies. Sometimes that’s just how the scoring works out.)

Stage 7 (CM 09-14 Eye of the Tiger): I knew the HHF for the classifier had zero room for confirming the sights too long. I set about just getting the gun out, gripping hard, and shooting a Blake Drill of headshots, and overall was surprised at how well it went. I called two of the shots a iffy, but they were on there, and As to boot.

Because I haven’t been practicing classifier skills, instead emphasizing movement and position entries and exits, it’s been quite a while since I actually shot a GM classifier. So that was another good feeling and great way to end the day.

Summary: I did end up managing to win the match among the low-cap divisions, which is a good note to start the year on. Now to hit the grip issues, and renew the focus on visualizing through stages so I’m not having to navigate while I shoot.