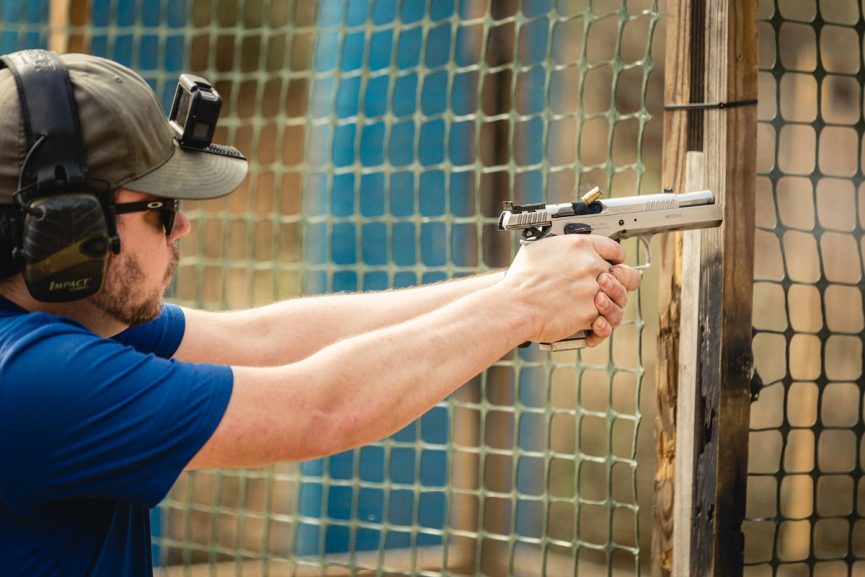 The highest-profile match to be held in North Carolina has come and gone, and I think it will go down as being largely a success: Rowan County Wildlife Association hosting the 2021 Area 6 Championship.

When the stages were first posted, it was definitely a bit confusing. Some of the stages, from designers such as Gerrit Heinrich and Bryce Dupuy, looked excellent. Some of them looked half-baked, at best.

For one thing, many of the stages would not fit in the bays Rowan had available. (Somewhat confusingly, although Rowan had 12 bays available, only 10 were used for the match, with two set aside for sponsors who didn’t show up. One of them was retroactively declared a test fire bay, which I think is a good idea any time you have people flying with guns, especially optics.) For two, some of the designs were just not good.

Take Stage 9. It featured 8 45-degree hoser targets at 3 yards. Having this much of the stage be hosing that tests basically no skills at all does nothing but dilute the value of the rest of the stage, and drive up the hit factor so that accuracy matters less on the rest of the stage. Luckily for us, Rowan doesn’t allow stages that involve shooting into the range floor; all shots have to go into the berms. (You would think the Match Director would figure out restrictions like that, as well as the size of the bays, before getting stages designed.)

Luckily, the local USPSA crew that puts on their excellent monthly match were able to redesign the stages on-the-fly and turn almost all of the bad stage designs into decent stages on the ground. That stage in particular was changed from being up-close hosing to being a challenge of having wide-open targets you wanted to engage while moving, with a few different interesting stage plans. (This was one of the rare few stages where a “anywhere in the shooting area” start position actually works.)

The least interesting stage of the day ended up being Stage 3, which was constructed basically faithful to the diagram. There’s not much you can do to rescue a 3-per stage where all 18 rounds are fired from a single shooting box.

Another thing that made the match such a success was having dedicated staff to paste and reset each stage. It seemed like this wasn’t announced until a week or two before the actual match, but there were a ton of staff on each stage. As a competitor, obviously this is always going to help you shoot your best. Doubly so when you’re trying to shoot 12 stages in a single day, with 14 people on your squad.

(I heard it second-hand that match leadership thought staff reset goes against the “volunteer nature” of the sport of USPSA. Nobody’s saying we should have caddies and staff reset at local matches, but when people are competing for the second-highest titles annually available in the sport, they should be given every advantage. If anything, expecting competitors to paste for themselves rewards the arrogant hotshot who sits on his ass all day while his squad curses his name and they do all the work. Staff reset is actually the most fair way to run a match.)

The staff also did a good job managing the bays where two stages had been set up. The 2018 Nationals tried to do something like this, where two shooters on a single bay would make ready at the same time, then having the left shooter shoot their stage, unload, step back, while the right shooter went, then both stages were scored in parallel. However this had weird side-effects like the stages not having any uprange-downrange movement, just side-to-side.

Instead, at Area 6, they would have the shooters both ready to go, but the left shooter would load, shoot, and unload before the right shooter loaded and made ready. It removed the complication of having to corral two shooters both with loaded guns, while keeping things moving fairly quickly. And with 14 people on the squad, you had enough time to load mags and re-set to get ready for the second stage. It worked well.

One aspect of this match that was new to me was the option to shoot either all 12 stages in one day, Saturday or Sunday, or to split and shoot 6 each day.

In retrospect, the trick to the scheduling is obvious. I just hadn’t seen it done before, but it worked well. In short, of your 12 squads that start Saturday morning, half of them shoot all the way through and half of them stop at lunch time. The ones that stop at lunch are replaced with other half-day squads that shoot for the afternoon, while the all-day shooters finish up the day. Then the next day you do the same thing, and half the squads are all-day squads and the other half are two sets of half-day squads.

Since, to my way of thinking, Area matches should be more like Nationals than state-level matches, this falls right in line with that idea. Nationals should be 3 or 4 half-days to give shooters the best chance to perform at their peak, while also having enough stages to accurately determine the winner. (This fits with the idea that Nationals itself is one step below the World Shoot, which was most recently 5 half-days of shooting.)

I went into the match basically straight off the off-season. I’d shot one club match each month January through March, but had done no dry fire or live fire. (I missed the April club match by cutting my hands on some broken glass the night before the match, which also kiboshed practice leading up to the match.)

My reasons for not dry firing leading up to the match basically boil down to my wife and I bringing home our first child in January, so getting the hang of that routine took a bit.

And my reasons for no live fire are the usual for 2021: primers and weather. I have a supply of primers that will last me a year or two of just shooting club matches and a few majors a year, but going out and shooting 500 rounds in two hours in practice like the good old days are gone.

And then of course there’s the issue of weather. I know it’s tradition for the Area 6 match to be in the spring, because it’s hard to work out the schedule of all the Area matches and Nationals without conflict. (Of course, two things that HQ could do to help would be having fewer, ideally one Nationals, and having HQ actually work to coordinate schedules to avoid conflicts, instead of it being a free-for-all.)

I can only guess that the tradition of A6 in the spring is because in parts of Area 6 you can shoot all winter (primarily the ones ending in -orida?). But as the northern-most state in Area 6, that’s not really how it goes for us. So even if I’d had buckets of ammo, the sub-50s highs until about three weeks before the match would have put the kibosh on training up much for the match. (I certainly would not complain if the match moved to the end of the season, leading up to Nationals.)

Given all that, I would say I finished the match pretty much exactly where I deserved: 11th in Production, at 80% of Jacob Hetherington who won the division. It’s definitely interesting to see the top three (Jacob, Sal Luna, and Nils) above 98%, and then fourth place under 90%. The race was really between the three of them, and it was fun to have that level of heat shooting at a club that feels like a second home range to me. I hope they thought it was a good match.

Here’s the video of how my day went:

I can definitely see the mistakes start to creep in as the day went on. I was originally signed up to shoot the two-day format, but logistically that didn’t work out, so it turned out to be an interesting experiment. If I have the chance again next year, I’ll definitely take the two-day option.

As for my individual performance, everything was not necessarily slow, but just sloppy, as you would expect from not having put in the reps to refresh all the fine details. I had to adjust my grip on the draw a few times; my grip pressure was wrong, so I had to work to recover the sights after each shot when they should have been tracking right back for the second shot; I had a number of reloads go bad just from going fast, but not having the precision from familiarity.

Ironically, two of the parts that most burned me were the “dumb hoser” sections: the front hosing half of Stage 11 featuring 18 rounds from basically one position, and the 3-per-target Stage 3. I’ve never been particularly fast on the trigger, and trying to go nuts and shoot as fast as I could pull the trigger resulted in poor points (Stage 10), a miss (Stage 11), and trigger freeze (Stage 3). I could try and say it’s a badge of honor that I don’t train those kinds of skills–ever, really, given my limited training time–but there’s really no excuse for having a gap like that in my game. I can’t say I’ll be able to work on it any time soon, but it’s certainly on my radar.

Overall, I’m glad I shot the match. I seriously considered not competing because I didn’t feel trained up for it. But it was definitely good experience as a shooter, overall a good mix of well-run stages, and fantastic match. Word on the street is that it’ll be back at Rowan next year, so if you can make it, I definitely recommend it.