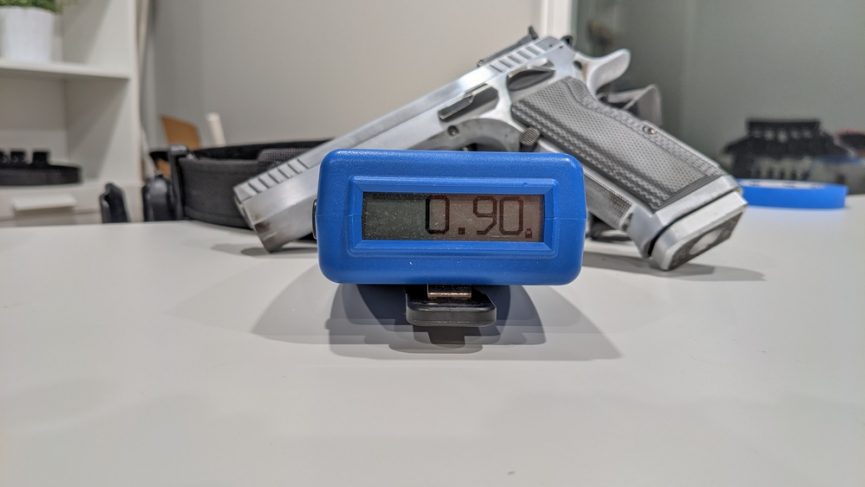 There is an idea in shooting instruction that there is no such thing as advanced techniques, just the same fundamentals applied faster.

There are two possible reasons that I can think of that someone would say this. The first, more charitable one, is the emphasis that fundamentals don’t change and there are no secret ninja tricks. If you want to get good, you have to have good fundamentals. And, as far as it goes, I think that’s true.

But there are some “fundamental” techniques that just don’t come in to play if you’re trying to shoot fast in a USPSA context. Being able to shoot 2″ groups at 25 yards is a good skill to have to build confidence in your gun and ammo, but that particular mode of shooting will never be tested on the clock at a match.

The second, less charitable, justification would be that the person speaking hasn’t mastered any advanced techniques themselves, and wants you to think they don’t exist so you don’t ask them about things they can’t do.

I think that the first justification is actually not far off, although if you think someone is using the second justification then just turn and walk away.

But, yes, shooting fast requires strong fundamentals. If you are jerking the trigger or anticipating recoil or shooting without the right amount of sight picture appropriate to the target no advanced technique can fix the lack of that proper technique. To put it another way, shooting really fast requires, but is not entirely composed of, good fundamentals.

What that means is this: it takes the average human somewhere between .25 and .50 of a second to react to stimulus. (Prove this to yourself by setting your shot timer on random delay, holding it in one hand, with your other hand two inches away; at the beep, slap the timer near the microphone to register a “shot”; with a few practice runs your times should be in the .25-.50 range.)

Let’s say that the average USPSA shooter, without too much of practice, can get the gun out of their holster and pointed at the target in under a second. The gun is out there, let’s say, at .90 after the start signal. But it takes .30 for their eyes to register the sights overlaid on the target and get the signal to the trigger finger to pull the trigger. First shot time: 1.20.

Let’s say you want a sub-second draw. If we take the .30 reaction time as a given (that’s a tough one to really reliably lower) then your eyeballs have to see the sights aligned at .70 to start the chain of events to pull the trigger.

The “advanced” technique? Don’t wait for the sights to be confirmed. Pulling the trigger becomes a pre-programmed part of the draw. There is no pause to clean up the sight picture once the gun is at full extension. Hands come together to grip the gun, arms extend to the target, weak hand clamps, as soon as the gun reaches the end of its travel, bang.

If someone is drawing and breaking their first shot on a target in under a second, I guarantee you they are not confirming their sight picture before deciding to pull the trigger. This is not to say they aren’t seeing the sights and calling the shot after the fact. They just aren’t waiting to see the sights before making the decision to pull.

There is no pause to wait and see if the sights are aligned. They are trusting that just like a thousand times before in dry fire the sights will be there and the shot will be an alpha. If they aren’t there, they’ll just fire a makeup shot at the end. (Which, if the makeup shot is a .30 split, ends up with a final time that would be exactly the same as if they had waited the .30 before breaking the first shot. This makes not confirming the sights a viable strategy in a competition setting.)

When is this useful? In most cases, not very often. On a 32 round field course, the .30 to confirm your sight picture on the draw doesn’t really matter. One makeup shot later in the stage could easily eat up anything you’ve earned by shooting without confirming the sights.

But on a classifier, it can be quite helpful. Especially if you can avoid spending the .30 on the draw and again when you finish the reload: mag seated in the gun, hands come together, gun goes back out to the target, no pause to confirm, and bang, sub-second reload.

If you’re struggling to break out of B-class and have never shot an El Prez draw or reload in under a second, you might be confirming your sights, and learning to trust your index and not require confirming the sights might be helpful for breaking out of that rut.

Or, if your dry fire isn’t consistent and thus your index out of the holster is bad, you might just start breaking the shot with no sight picture at all and start racking up uncalled misses. So, caveat shooter. But that’s an example of an advanced technique.