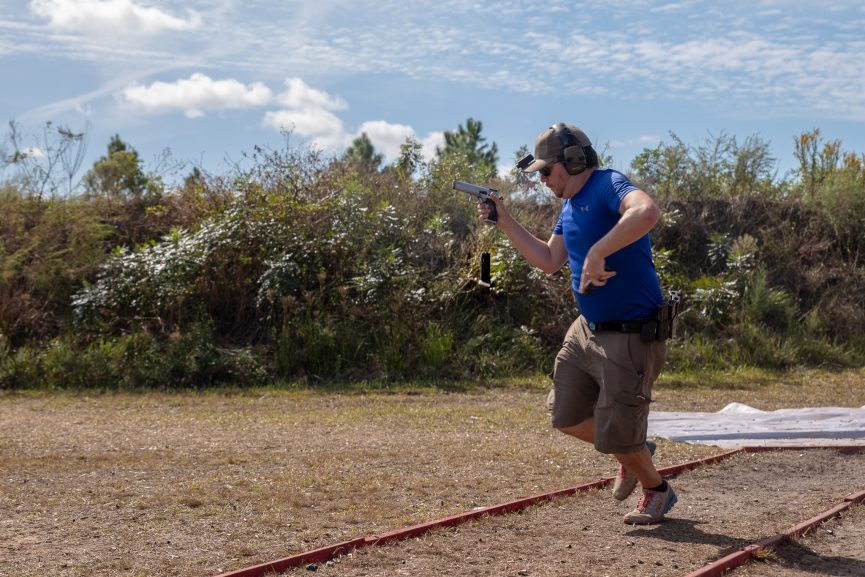 At a match last weekend, while our squad was shooting the classifier, a friend who practices a lot but only gets to shoot one match a month asked me: “How do you guys reload like that? I try and practice reloads, and mine are never that smooth.” and then he mimed fumbling a reload as I started to consider what he was asking. “What do you do?” he asked. “Just more reps?”

Now, I don’t know what other guys do, just what’s worked for me. But here’s what I told him:

When I’ve had breakthroughs, it’s always been by figuring out exactly where to direct my attention at the right time.

When I relax my hands and get ready to draw, figuring out what feeling I should hold in my head of what I want my hand on the gun to feel like as soon as the buzzer goes off.

When I start to do a reload, figuring out what feeling I want to have of the basepad of the new magazine in my left hand.

I used to have slow reloads because when I started doing the reload I thought about the right hand first and focused on ejecting the magazine straight down while I let my left hand go on autopilot to grab the magazine. Eventually I realized that dropping the old magazine requires very little precision, but I was having bad reloads because of a sloppy grip on the new magazine. Because the limiting factor of the speed of a reload is the time to get the new mag to the gun, by prioritizing that aspect of the reload, the entire movement got faster. I also started getting a more precise grip on the magazine, because I was giving my mind a higher resolution picture of the result I wanted. Having a better grip on the mag immediately helped make inserting it more consistent.

So for me, improvements are always about focus. Figuring out exactly what to focus on in exactly the right order. That’s where the breakthroughs come from.

Once you figure out what to focus on, you dry fire and think about those focus points while you practice. Then on match day, you just trust them to happen. When I’m actually shooting a stage, I’m not thinking about those focus points. Right before the buzzer I’ll think about the grip I want to have, but after that it’s just letting the visualization happen, watching the sights, and calling the shots.

Instead, spend your reps trying to make it different. Experiment to try to figure out what you’re missing. In the case of a reload, try reloading with the gun higher, or lower. Further out or further in. Start with the fresh magazine already in your hand. When you bang the magazine off the magwell, pause and look at how the magazine is sitting in your hand. Rewind your motions and try to see exactly how you grabbed the magazine out of the pouch that led that bad result.

If all else fails, put on some music and do reps for five minutes and try to see the patterns between good and bad reps. Push yourself to do it two tenths faster than your normal par time just to force the wheels to fall off, then observe what happens when they do. Try to solve backwards and figure out based on where the failure happened where the flaw is in your technique.

It’s like pressure testing a compressor. Keep pumping more and more air into the tank until it starts leaking out. Find out where the leak is, reinforce or replace that part, and keep repeating.

There are no magic foolproof techniques that the best shooters have figured out. Even at the top of the sport, the guys that are still improving are going through this exact process of identifying the leaks and plugging them. Their leaks are just smaller. But they’re not different people than you or me, they just started sooner and plugged all the big leaks already.

So decide what technique you want to improve and follow this process. Iterate until you find the right combination of mental focus points to produce better results.

And, as an aside, one bonus of this approach is that it even works for skills you don’t use all that often. For example, if you spend a few weeks practicing shooting weak-hand and find the right set of mental focus points to do it well, then just remember those. Even if you haven’t practiced that skill regularly and you come up to a stage where you have to use it, just remember those focus points and work them into your visualization. It works a lot better than just trying to shoot a bunch of rounds on that particular skill when you see it in the match book for an upcoming major.

Again, all I know is what’s in my head, but I would bet good money that this is, in one form or another, what the successful high end shooters are doing. They don’t shoot until they get a subjective “feel” for how something should go. They shoot until they find the set of repeatable focus points to produce a given result. And then they remember them. Before a big match, they might go and refresh them, just make sure they are remembering everything clearly. But they’re not trying to “memorize” the right speed. Just refresh their memory of the focus points.