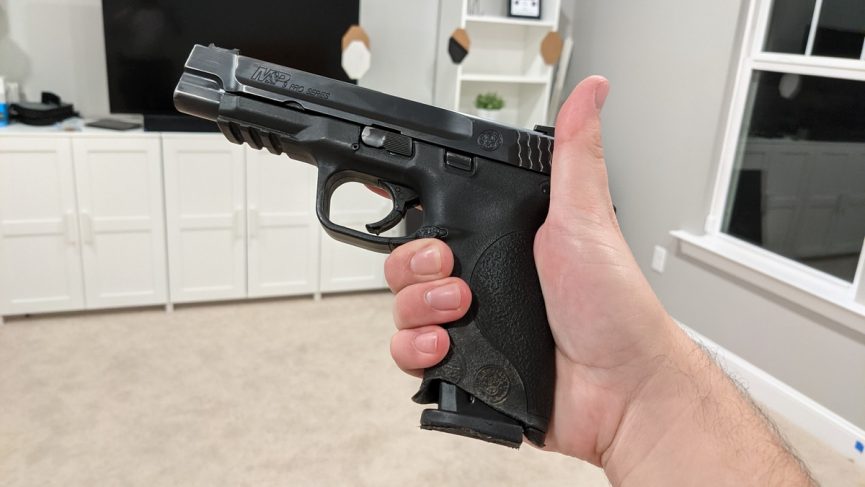 Back in the dim mists of 2012 and 2013, I spent the offseason shooting a 1911 in Single Stack and CDP. When November 2014 rolled around and I took a Steve Anderson class, I was motivated to just keep dry firing through the winter and shooting Production, which I’ve continued to do every year since then. I might take some time off from practice when it’s cold out, but I haven’t shot a match with a different gun than my main once since. At the time, it was an M&P Pro, then in the 2016-2017 winter I switched to a Stock 2, which I’ve shot ever since.

But the idea got going around the regulars at Sir Walter that it would be fun for everyone to shoot a match in Production with some kind of plastic gun. Everyone has at least one, so let’s get out and shoot them heads up all at one time.

So, for the December 2020 Sir Walter match, I got to run my M&P for the first time since 2016. (I have shot some IDPA matches over the years with a carry gun, but that’s really a horse of a different color.)

Overall, it was pretty fun. I had one practice session to re-zero and shoot a few drills with it, but I was going into the match pretty cold and unfamiliar. As it was though, things went pretty well.

There were a few new-gear pains, which is a risk when you switch to anything you haven’t been running for a while. The extractor roll pin on the particular gun I was using for this match was walking itself out (which roll pins are specifically used so they won’t, right?) and my holster started coming loose from the mount. These are the kinds of things that always take a few matches to work out after changing gear, and it was a good reminder to make me glad I don’t do change gear more often.

Overall, I was noticeably slower than usual on hard shots just because I was very cognizant of not having enough practice with the gun to just pull the trigger straight through and trust the sights to not move. This isn’t anything inherent about the gun, just a difference going from a relatively fat-gripped gun with a relatively long trigger reach to much a slimmer gun with a flatter trigger, which in my experience is easier to inadvertently “push” sideways instead of pulling straight back.

In terms of shooting dynamics, I found the skinnier grip with the square front definitely felt like it was easier to get a solid left hand grip, because my grip could be “tighter,” for lack of a better way of describing it. But the flipside of that of course is having less room on the left side of the gun to make contact with your left hand. But the more time passes the more I’m wondering how important that really is.

As for recoil, the muzzle definitely jumped more, especially when I was aiming hard (read: not gripping hard), but it still returned quickly. As the match went on I definitely found myself finding the gun’s rhythm and being more confident shooting and calling quick splits, particularly on a close, fast stage like 5 (my second to last of the day).

I had such a good time shooting the different gun for a match, I decided to do it again the next weekend at the True North USPSA match at The Range in Oxford. Ironically though, the “new and fun” part had worn off and I was just frustrated the whole day that the gun wasn’t an automatic extension of my hand the way I’ve gotten used to over the last few years. I’m sure a few weeks of dry fire and a thousand rounds of practice could probably get me there, but it was mid-December and time to take a break for the holidays anyway.

So, the M&Ps went back into the vault, and when the New Year came the Stock 2s came back to start the 2021 season.

Was it worth it?

I think in general, taking some time to play around and experiment when the stakes are low is a great way to make breakthroughs. As much as getting better is repetitively practicing, it’s also seeing the way forward or seeing something in a new light and giving you a new approach to it.

In the case of this offseason, I didn’t want to take apart my dropped-and-offset holster mount for the Stock 2, so I just ran the M&P holster just on a regular Tek-Lok belt bracket. And, to my surprise, I really liked it.

My Stock 2 holster has been on a DOH hanger since 2016, and while it’s fine, I’ve had two main gripes with it.

First, because the backstrap of the gun is below the level of the belt, I’ve banged my thumb on the metal bracket quite a few times, especially in dry fire, trying to work on speeding up my draw. Trying to thread the needle with my thumb between the belt mount and the gun while drawing has always been a bit of a distraction, but it comes with the territory of having the gun that low on your belt.

The second issue is just how far down and out the weight of the gun is on the bracket. Again, I know this comes with the territory of a DOH holster bracket, but it’s always annoyed me any time I have to move at even a jog and the gun feels like it’s flapping around no matter what.

Putting the gun on a Tek-Lok both raised it up and moved its center of gravity in, fixing both of those problems. After so many years with a DOH holster, it honestly felt like cheating to be able to just go to grab the gun as fast as I could and not have to worry about whacking my thumb on the metal bracket.

So, switching back to the Stock 2s, I’ve kept that high holster position, and I’m still liking it quite a bit. I’m not sure if I’ll stay with the Tek-Lok or look into some other metal hangers that offer more adjustment (but without so much drop and offset), but for now this is definitely a positive improvement.

Although this might seem like a simple change, it has really rejuvenated my dry fire as well. I feel like I’ve got a new edge and I just need to put in the work to exploit it and I’ll be able to break through to the next level. (Is it a coincidence that I shot my first GM classifier in years this past weekend with the holster in the new position? Impossible to say.)