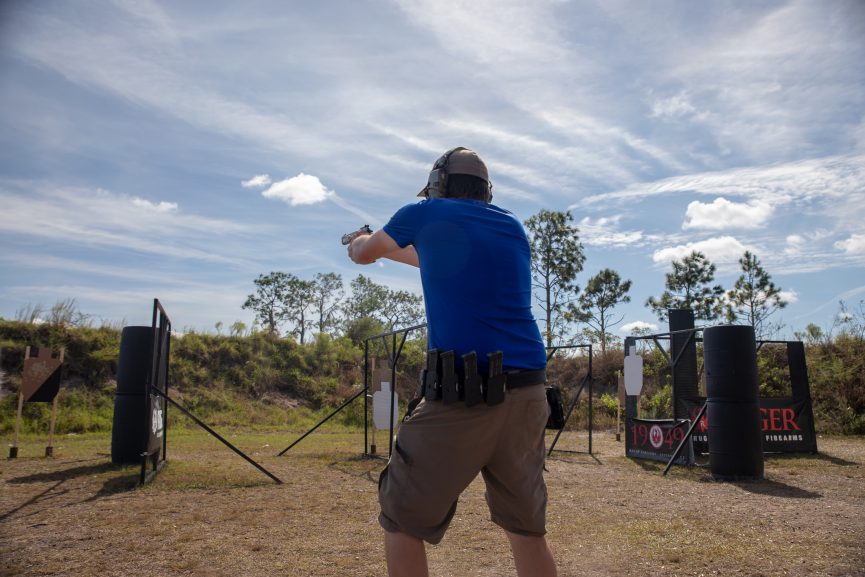 I saw some discussion elsewhere online talking about the upcoming Low Cap Nationals and how best to take advantage of the practice/warmup bays that are typically available at Frostproof (as well as any halfway decent range that is hosting a match as big as Nationals). It wouldn’t be productive for me to post my answer there, but it got me thinking about the question.

Should you use the practice/warmup bays at big matches? No. But I thought the different reasons why were worth talking about.

So, to start, let’s paint the picture of what these bays look like, in my experience. The practice bays are all the way at one end of the range since they are technically “outside” the purview of the match. At Frostproof, they tend to be the very farthest bays from the parking lot. So they are time-consuming to get to. There’s a common firing line usually 10 or 15 yards from the backstop. At the base of the backstop are all manner of targets, some steel, some paper, but by the time you get there, everything is already shot to pieces.

Tip #1: If you *do* need to use a practice bay to zero a gun or confirm your zero, try to take a target with you that you can staple up or stick to the target with pasters. An index card, a sheet of paper from a notebook, the hotel notepad, whatever. Just make it visible and clean to shoot so you’re not trying to pick your shots out among the shot-to-pieces targets.

If you get lucky, you get to the bay when no one else is shooting. Even then, it’s tough to do anything you would normally call “practice”. At most you can shoot one or two targets, and you’re rushing to do whatever you need before more people show up.

If other people are already on the bay, then you can step up and start shooting, but you have to wait until everyone agrees to go cold to put up your target or go see your hits. Very, very different scenario from trying to zero a gun in a practice session where you can walk downrange any time you want.

Tip #2: The practice bay is great if you just need to function check your gun, like if you have an iffy mag, or an iffy batch of ammo. But, c’mon man, this is Nationals. You should have enough spare mags to just bag that one and deal with it later. Or if you have iffy ammo, you’re already sunk. Shooting 50 rounds at the practice bay won’t necessarily give you the confidence to shoot 500 rounds over the course of the coming 21 stages.

The second reason to avoid the practice range is just upside vs downside. You will almost certainly shoot and find something you’re not quite happy about. Maybe you draw and the gun doesn’t come up to your eye just right. Or you notice your weak hand is sitting lower than normal in a way you’d never noticed before. The point is that whatever small error inevitably happens on the practice range can get in your head and set the tone for the rest of the day. You are much better off going to your first stage with confidence that you will draw the gun, point it at the target, grip it properly, and press the trigger straight to the rear like you always do in practice.

Because, whether or not those things are true, you will still have a better result than going to the warmup bay. If you have a hitch in your draw, or a bad habit of looking over the sights at close targets, or whatever it is, you will not fix that problem the morning of the match. So if you go to the practice bay just to be reminded of it, you are starting the day on a bad foot.

To wit, best case is that going to the warmup bay, you go and shoot and it’s uneventful. You draw the gun and shoot it and hit what you aimed at and the gun handled for you exactly the way you expected. Great. So just skip the practice bay and assume that that will happen.

On the other hand, the worst case is that you make some mistake that sticks in your mind and distracts you from the match. Or you have some jam that you then wonder how many other times it will happen throughout the day. If everything goes well, the warmup bay will be a non-event. But if things do go poorly, you’re setting yourself up for being distracted or failing. So just skip it.

And then there is a third, mental reason that you shouldn’t use the practice bays. If you feel the need to shoot some rounds to warm up before you can really hit your stride in a match, that is a crutch you will continue to lean on until you decide to learn to walk without it.

See, shooters who get better when they’re “warmed up” are shooting by feeling. They have a feeling of how the gun should cycle and how fast their splits should be. They’re not deciding what sight picture to see before breaking the shot and what hand tension to feel when finishing a reload. Those small, technical details are the key to success.

If you practice, live fire and dry fire, until you know those things, then you don’t need the warmup bays. When you close your eyes and visualize a stage, you shouldn’t just see the targets, you shouldn’t just see your sights overlaid on the targets, you should also feel the key moments of tension in each step of drawing the gun, shooting it, moving out of position, reloading, and everything else. When you can make a plan like that, visualize it through, and then execute it, it’s easy to do that over and over again.

This is why some people have no problem taking a reshoot and some people crumble when they have to repeat their performance on a stage. People who shoot on attention cues just visualize the same cues and hit the same marks during the re-shoot. But people who shoot on feeling are always walking the fine line between too much effort and not enough. They have one foot on the gas and one foot on the brake and they’re always trying to press each one in just the right balance. So when someone like that gets a reshoot, or shoots a good stage, they tend to get cocky and press on the gas just a little bit and end up “feeling” their way right into charlie-mike-no-shoot.

Shooting on feeling is fragile. You might have a good day and be on a roll and be forced to stop and take a break because your squad is done for the day. Or you might be thankful for the break so you can stop your downward mental spiral from bad stage after bad stage. But either way, letting one stage bleed into the next by trying to nudge your “feeling” of speed up and down from stage to stage will eventually unwind. This is part of the reason bigger matches have more stages. It’s a test of who can consistently deliver stage after stage.

Which brings us back to the warmup bay. If you feel the need to go warmup, you are shooting on feelings. You haven’t yet figured out the right set of attention cues to execute stages in a boring, mechanical way. You probably still get excited when a stage goes well. That excitement feels good in the moment, but only because you don’t think you could shoot that well a second time. If you know you could, then each successive good stage in a match is just one more hurdle cleared without incident.

And one of the keys to that consistent mindset is freeing yourself from the idea that you need to warm up before the shooting for the day. It’s less than a month until Low Cap Nationals, so if that’s where you are, so be it. Do what it takes in the practice area before the match. But by this time next year, set yourself the goal to kick the habit. You don’t need it.